Google at the Google I/O event has finally unwrapped the newer version of the Android 12 operating system. The latest Android 12 OS will be released later this year on various Pixel Devices, as said by the official reports.

The company has promised that the latest operating system will be released for third-party Android-based devices for its partners like OnePlus, Xiaomi, Samsung, Nokia, etc., earlier next year. If you may remember, the Android 12 operating system was under the Developers Preview program that had many bugs and was meant for testing only. Earlier, Google had already released three major Developer Previews of Android 12 OS for its Pixel devices. 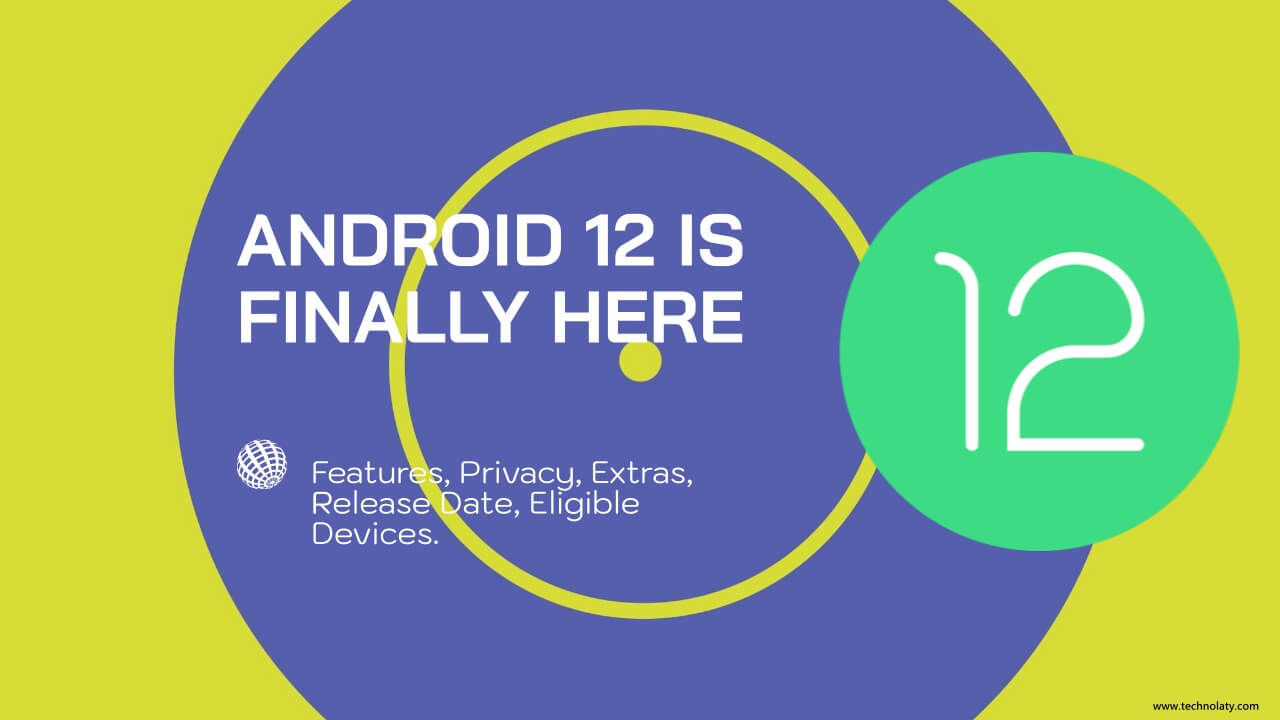 With the launch of the new Android 12 OS, Google brings some of the most significant design changes to Android since 2014. Earlier, Google made a substantial design revamp with Android 5 or Android N (Nougat). Unlike previous design updates, Google will bring the all-new “Material You” design language to its Pixel devices. This year the new design will remain exclusive to Pixel devices.

The latest Android 12 operating system will first be made available to all Google Pixel devices exclusively. The list of compatible devices includes, 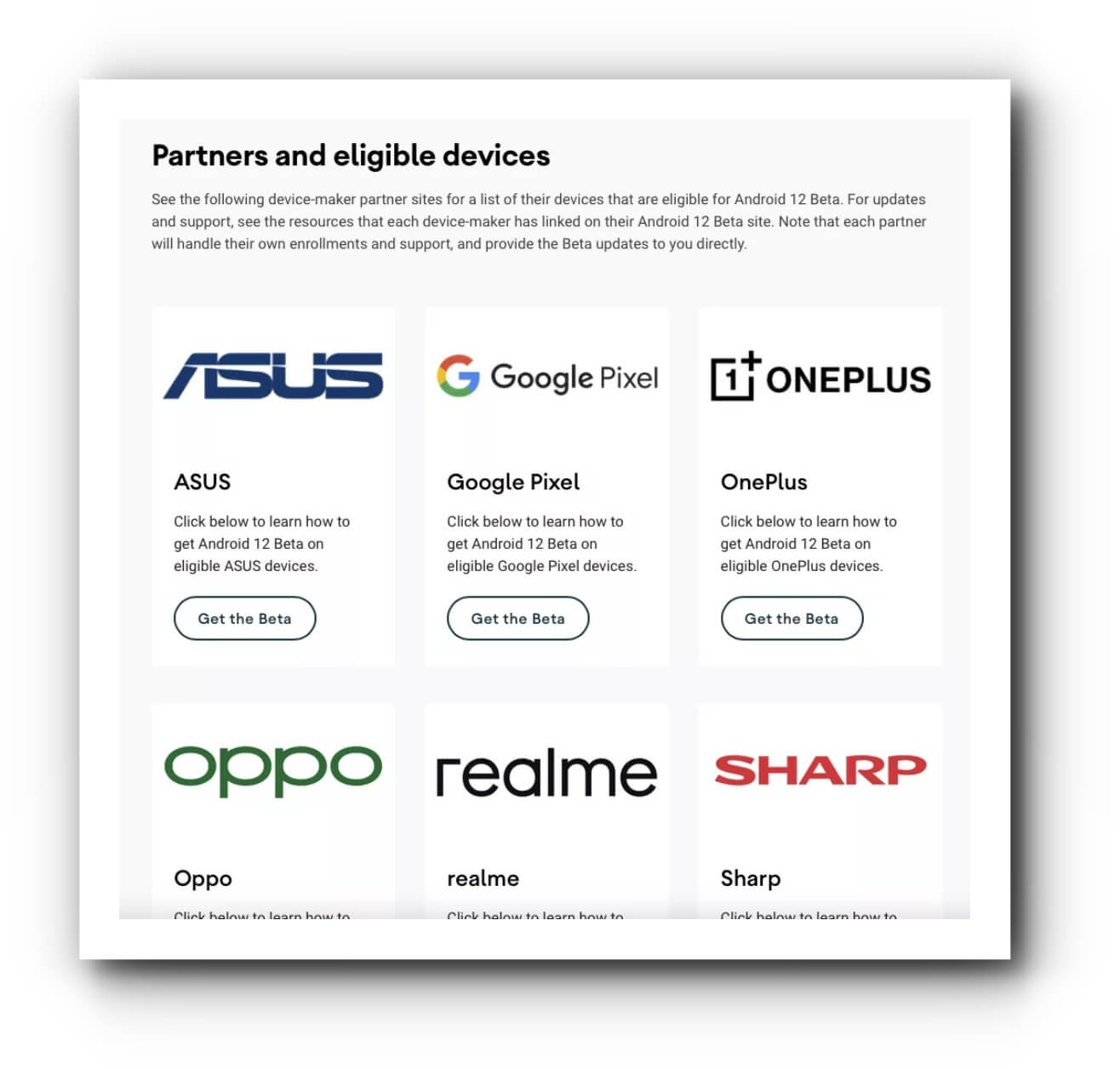 According to Google, the Material You design language comes with complex colour science. It brings complete transformative controls to the interface. With this new design, the interface will pick similar colours which match the wallpapers. These colours will be applied across the interface for accent. With the new design element, Google has also redesigned the system widget altogether. Besides dark and light, the all-new design features a mode for all moods.

In this new version, Google now brings several colour-based modes apart from the usual dark and light modes. This will allow users to customize elements based on moods. According to reports, the new Material You Design is coming on Google Pixel devices and Android 12 Update in Q3, 2021.

According to a report from Google, there are more than 3 billion active Android users around the world. Therefore, the all-new Android 12 is one of the most ambitious releases for the Android ecosystem. Google adds that the new version update will make your smartphone more private and secure. It will work better as it will adapt to the user’s requirements with this new update. 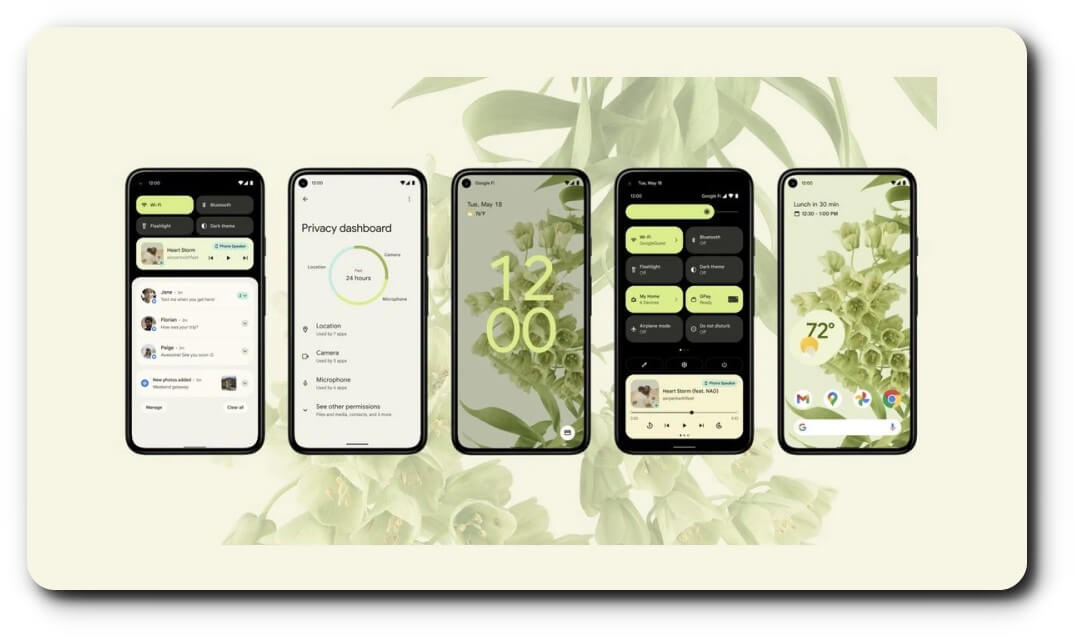 Some Visual Changes on Android 12:

With the new update, Android 12 will be getting a drastic design makeover. The primary design changes come as part of the new Material You design theme. In this Android 12, the system will use the colour extraction technique to get unique accent colours for the entire interface. The new process will also help users in creating new unique themes for Pixel devices. Additionally, in this new update, Google has also worked on improving the visual effects. The new Android 12 update will provide better animations, especially on the lock screen. The Always-on Display will also get a significant design update. The Clock Widget will also appear more prominent on-screen.

Other Design Changes on Android 12

In the Android 12 OS, the quick panel and notification shade also get a significant design change as we have seen in the Developers Preview 2. The Quick Settings panel gets a uniform design with new buttons. All the buttons on Quick Settings wear the new “Material You” Theme. Besides basic device controls, users can now access Google Play and Google Home controls within Quick Settings. Google confirms that the new Android 12 update will reduce the CPU time by 22 percent. Therefore, making Android 12 much faster and smoother for the users with all new animations.

The latest version of Android 12 carries forward all the previous privacy and security features. Additionally, it also gets some new security and privacy features. In this Android 12, users get a new Privacy Dashboard that reports all apps, including Google Apps. The new Dashboard represents how much the apps and the sensors are accessing private data. Just like iOS 14, Android 12 also gets a Privacy Indicator in the status bar. In Android 12, users can also disable sensors for certain apps within the settings. “Now Playing” and “Smart Reply” will continue to ensure a high standard of privacy. 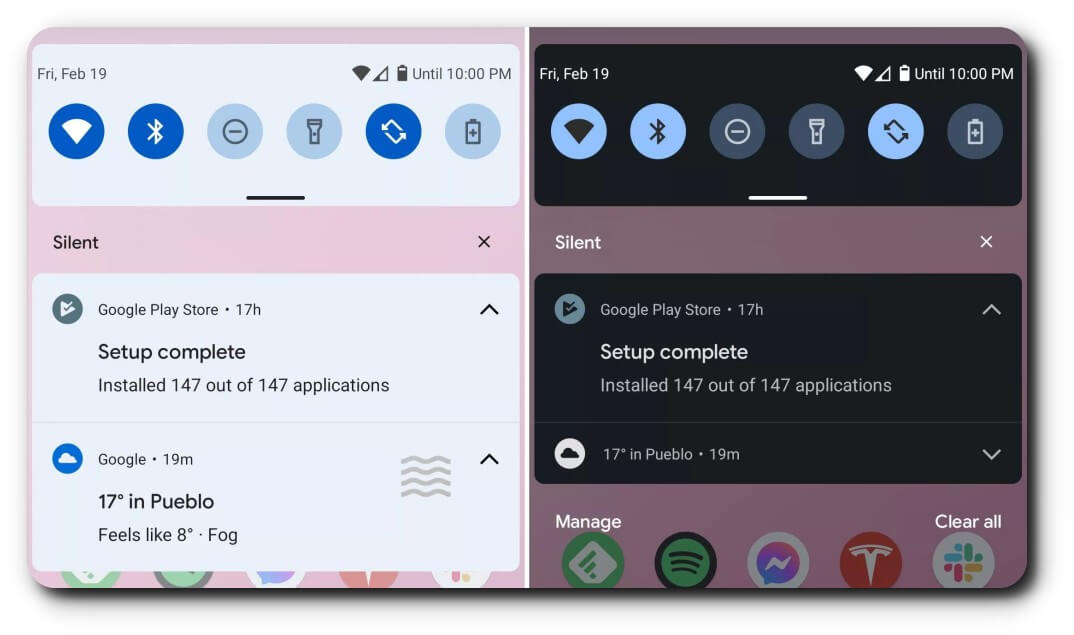 Google has also added a built-in TV remote feature in this Android 12 OS. This built-in TV remote will help in controlling Android TV OS-based smart TVs. With NFC and UWB (Ultra Wide Band) Tech availability, Android 12 also gets the Digital Car Key feature. However, this feature will be launched on select Pixel and Samsung Devices later in the year. Google confirms that this feature will work on BMW cars.

Additionally, Google is also working on cameras. Google wants cameras to work somewhat for everyone. Therefore, users will see all kinds of improvements in terms of lighting, exposure and better details. All of these features will be improved using Google’s advanced AI solution. Google has started rolling out the Android 12 Beta 1 on all the supported Pixel devices. The Beta update will also be available for other Android devices from third-party manufacturers.

Android 12 brings a lot of improvements and features required to increase productivity and ease of usage. You can find Android 12 based custom ROMS for your Android-based smartphone even before it is released officially by your manufacturer. Remember, you must oblige the companies policy of not unlocking the bootloader to retain the warranty of the device. However, many companies such as Xiaomi, Realme nowadays allow unlocking the bootloader and install custom ROMs.